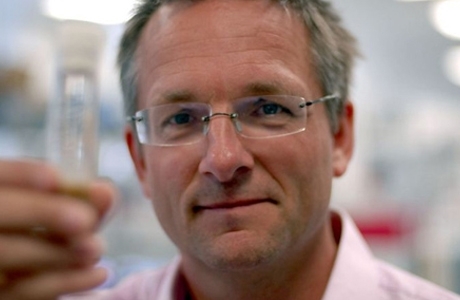 When was the last time you were on a fast, eating a lot less than normal? The time you had the flu? That medical procedure that required a 12 hour fast, but delays extended it to 16 hours? Not much choice there, but have you ever deliberately chosen not to eat? Well, a few readers are hearing about the concept of occasional or intermittent fasting (IF) for good health and a long life. One big fan of the idea is Michael Mosely (see pic), who has written a book on the concept of IF. It got a "leg up" on the back of his TV documentary on IF.

The idea is simple. Eat normally, and healthily I presume, for five days and for two non-consecutive days eat only 500-600 Cals (2100 - 2500 kJs). Proponents excitedly explain that you will lose weight. No surprises there. Eat less food and we all lose weight. But is there more to this?

Early this year there appeared an interesting and balanced article in the Scientific American on IF. I recommend it to you as I won't be repeating much of its information. It mentions Mark Mattson, Institute of Aging in the US, who has studied the area for many years and believes that IF is both brain and heart-protective. His work also suggests that periodic fasting might protect the neurons, lowering the risk of Parkinson's Disease and dementia. He thinks that IF better mimics how we ate during most of evolution, and offers a survival advantage. If you could go a few days without food, yet still gather and hunt smart, you pass down clever genes. Most studies have been done on laboratory animals. Even if they are encouraging, they aren't persuasive.

IF not protective against cancer

A recent review of both regular fasting and IF in humans found no protection against breast cancer, but an increase in the risk of other cancers. Long-term Calorie restriction did see a non-statistical trend to cancer protection in mice, but nothing to get excited about. Their conclusion was to stick to what we have said for years: don't get fat and eat well. You can't sell a book with that kind of advice.

No proof that IF better that good wholesome eating

One thing I can't do is separate the benefit of eating well and remaining a reasonable weight from the potential benefits of doing that AND following the 5:2 or IF routine. I know my own Basal Metabolic Rate is 1800 Cals (7500 kJs), done under proper laboratory conditions. I might need 3000 Cals (12500 kJs) or more on a very active day. If I eat less than a quarter of my needs on two days of the week, I just don't think I can be active as well.

Here is the constant problem we face when trying to advise people of a so-called perfect health-enhancing diet - we live too long. That is, too long to make an assessment of any new diet theory, such as IF or the Paleo Diet. We would need many thousands of people following a new non-traditional diet idea for 60-100 years to then be able to say: "This diet, on average, will give you a lifespan of 120 years."

The best we can do is observe those that have eaten a specific style for hundreds of years and lived to a good age, reasonably free of disease, and marry that with science of physiology and aging. The traditional Japanese and Mediterranean diets are the most realistic models we have at the moment.

What does it all mean?

Diet sensations come and go, get recycled, repackaged and return because diet ideas are a commodity. Emphasise a need or concern, supply a solution and six months as a new diet book, with its accompanying cookbook. OK, so I'm not excited by IF, mainly because I haven't enjoyed hunger nor do I think well when starving. I much prefer that we ate for nutrition, health, enjoyment, community and prepared food for pleasure and discovery.

So, if you like the idea, try it. I don't think you will come to any harm. You probably won't have the energy to exercise much on the semi-fasting days. As I have said before, you are your own boss. No evangelistic dogma from me. However, if you are an IF devotee, I would really love to hear of your experiences.

How Exercise Protects You From Depression

There is no doubt that mental health is becoming a...